I love viewing and photographing public art in Houston. Whether it’s Patrick Renner’s Funnel Tunnel or performing art from Australia’s Strange Fruit Swoon in Discovery Green Park, I try to get out there and capture the moment and hopefully help promote the artists and encourage new artists to share their craft with us.   In the last couple of weeks, I’ve been hearing about a new mural in Midtown Houston that is touted to be the largest mural in Houston so of course, it had my attention and wanted to find out more about it.  The name of this mural is”Preservons La Creation”  created by  Artist Sebastien “Mr. D” Boileau along with Eyeful Art and UP Art Studio and partnering with the Texan-French Alliance for the Arts’ “Open the Door Project” and Midtown District and is painted on a five-story, 8,000 square foot mural on 2800 San Jacinto Street (man that’s a mouthful).

I got to be there for the preview unveiling and took a few pictures. For the record, I’m not associated with this work or studio in any way and am just a freelancer with a blog and post pictures for editorial non-commercial reasons. Sometimes I get invited to things and sometimes I seek them out myself. I think it’s a bit humorous to call it an unveiling considering how big this mural is and how it’s impossible to miss it! It would have been funny to cover up the work with a giant cover and then drop the cover however.  The official unveiling is this weekend (first week of June 2014).  For more information go to the official website: http://www.thebiggestmuralinhouston.com/

Photography-wise, I was there at the perfect lighting late in the afternoon. They even had an aerial silk performance which of course I had to photograph. By the time I got there however, the light was a bit patchy to photograph the entire mural so I was going to wait until sundown to do that and enjoyed the aerial show : 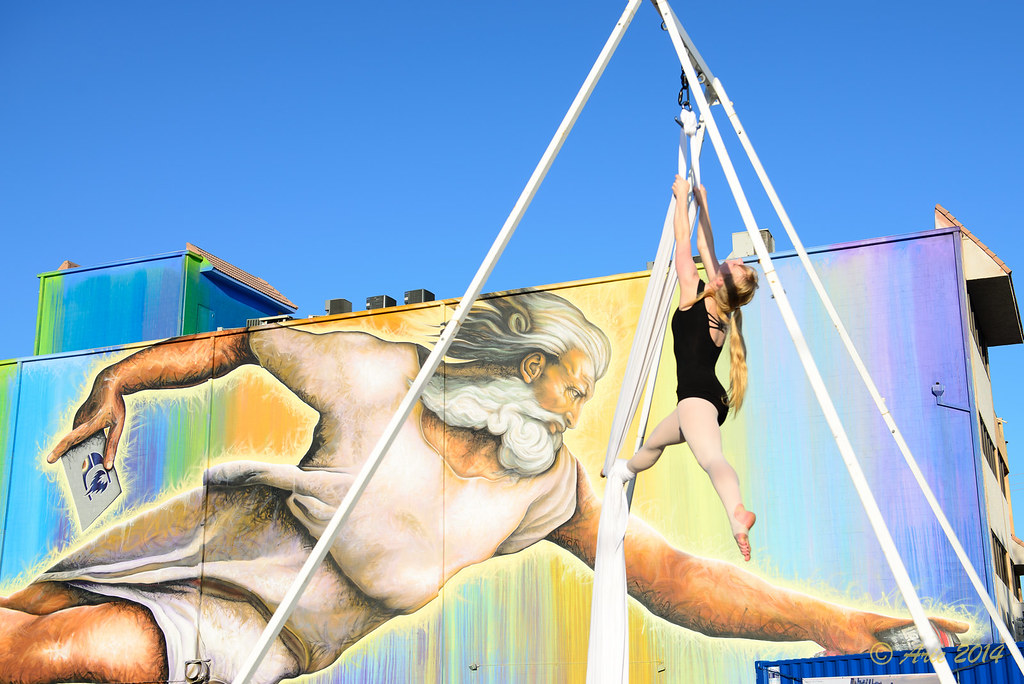 After the crowd went inside for the other events of the evening, it was about 20 minutes after sunset and the perfect time to photograph the entire mural:

I say this is the perfect time because as you can see, just after sunset, the sky turns into a deep cobalt blue. If you photograph too soon, the sky is blown out and white; if you wait too long, the sky turns black. In order to make the art work show up however, you need a secondary light source on the subject and in this case, the mural is lit with what looks to be a typical ugly High Pressure Sodium parking lot light – you know, the ones that you see in many places. Fortunately, there was only one light and it was far enough to cover the whole painting so I could correct for the color temperature in post processing and turn that ugly light into the pretty colors you see in the photo. An added benefit to the yellow color of the light is as I corrected for it, the sky turned into an even richer blue.

So there you have it. Go support this event this Saturday or if you’re reading this afterwards, take a walk by the mural. We can have pretty things in Houston. Speaking of which, here are a few more aerial silk photos. My photographer’s eye wishes the setup was in the middle so I could show more of the mural but then I was just an observer of this event. 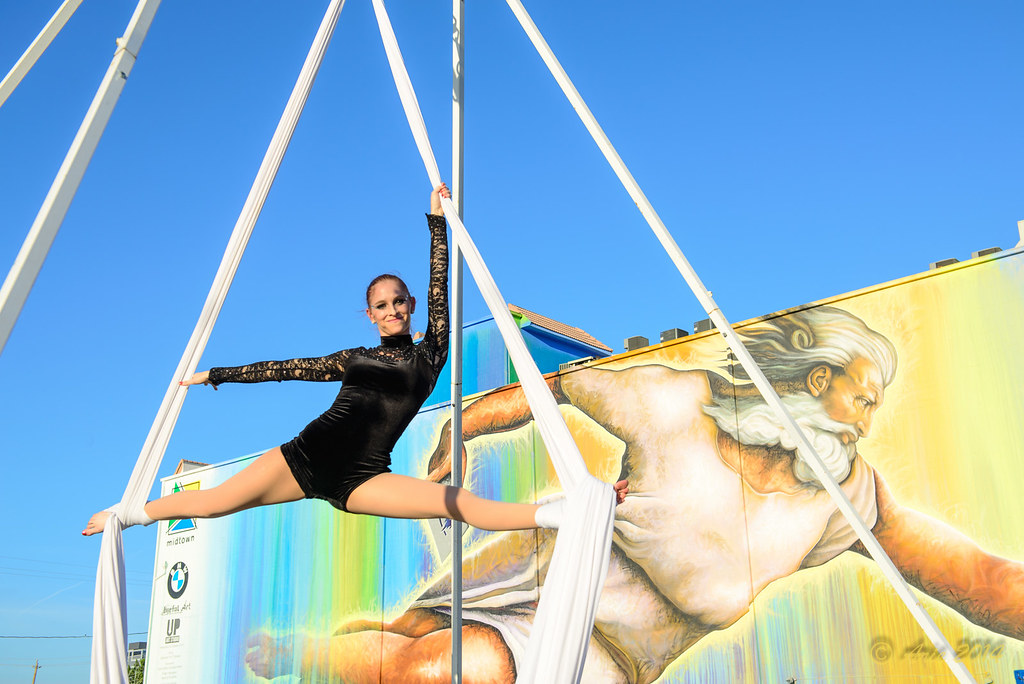